Let's take a minute to appreciate how essential Ancient Shapes has become to maintaining Daniel Romano's mystique. Without that band, it would be too tempting to shoehorn the Niagara musician into some tired narrative. In the past decade it's become pretty common to see the frontman of some popular punk group take a late-career turn towards roots music. You trade your leather jacket for some flannel, get yourself a harmonica, and you're pretty much there. There are entire tours built around that premise. Dan distinguished himself from that pack early on by making his first few folk and country records aggressively authentic. He threw himself so wholeheartedly into that world that it not only separated him from the pretenders, but it made his rock'n'roll past seem a million miles away.

It wasn't crazy to assume that Romano'd forever leave the youthful Attack In Black in the past as he pursued a serious musical career. That's why Ancient Shapes is such a delight. Not only did Romano throw everyone by revisiting punk rock, but he did it by tapping a well of influence 25 or 30 years earlier than Attack In Black ever dared tread. That band's become an essential counterbalance to Romano's solo work, particularly as that material trends further into lush psychedelia. It also pokes holes in any attempt to pigeonhole Dan's direction as an artist. He's not returning from some roots diversion to the sound of his youth. He's not playing the nostalgia circuit for those early fans. He's operating on a whole other level and that uncertainty is thrilling.

The latest from Ancient Shapes is a three-song EP that's both a fundraiser and a tribute. Rats Forever leads with a cover of the song "Teenagers" by early 80s Portland garage punk band the Rats. The Rats were one of Fred Cole's projects. In it the Lollypop Shoppe frontman played guitar and sang, with his wife Toddy on bass and a revolving list of drummers. Cole, of course, passed away this November at the age of 69. Two originals accompany the cover: "Transparent Brain" and "Something is in Flux." All proceeds from the album are being donated to the Toronto Overdose Prevention Society, a funding effort to support Overdose Action Toronto, the Toronto Harm Reduction Alliance, and the Toronto Harm Reduction Worker's Union. You can buy the release at Bandcamp or donate directly to the organization's ongoing crowdfunding campaign.

It's particularly exciting how Ancient Shapes is starting to play off of Dan's solo endeavours. This winter he'll be taking the Jazz Police out west for a continuation of the tournée infinite in support of Modern Pressure. They kick off on January 10 in Winnipeg at The Good Will and wrap up on the 20th in Vancouver at Cobalt. Of course, if you drive out to BC, you've got get back home, so they're doing that as Ancient Shapes. That guise plays Vancouver four days later on January 24 and heads eastward to wrap up at Toronto's Smiling Buddha on February 11. You can find all the dates at You've Changed. 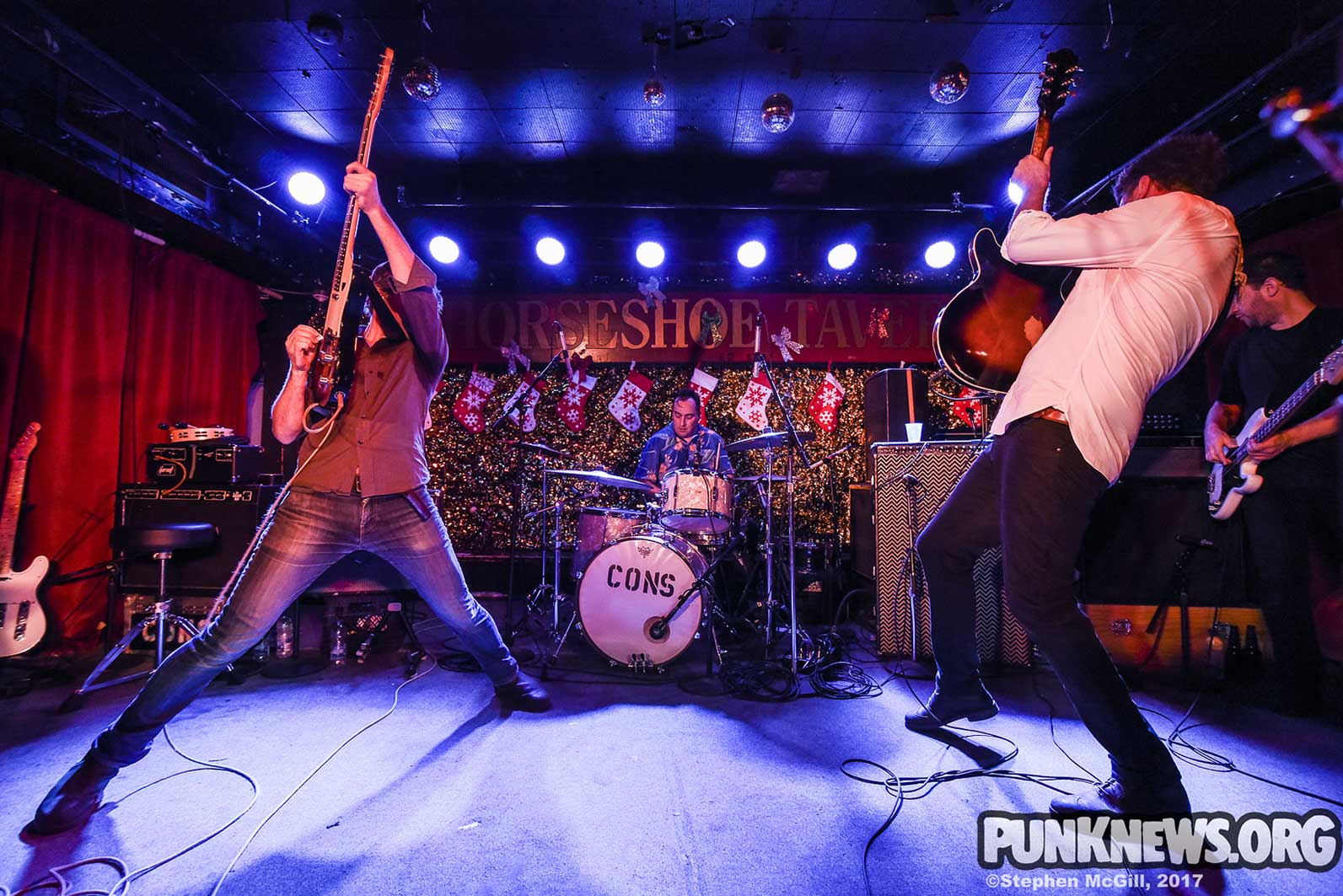 I can't speak to what went down on Saturday night, but on Friday the Constantines included five new songs in their set at the Horseshoe Tavern. This is an escalation and a damn welcome one. Since the band started playing shows again they've been tight-lipped on whether they'd be writing together. The logistics of everyone having their own lives and families made that far from a certainty, but here we are. Bry Webb joked during their set that at this rate they'll put something out in 2020.

I've been running Toronto show photos by my friend Stephen McGill over at Punknews.org, and this show was thankfully on his list. You can find his photos of both the Cons and The Highest Order, who opened, at Punknews.

Lido Pimienta has a new video online for "La Capacidad," one of my favourite songs from her Polaris winning art-pop record La Papessa. The Columbian-Canadian premiered the track on Border Blaster, a world music video series curated by the internet radio station Dublab and presented by LA's KCET-TV.

Last week I featured the new full length from André Ethier, Under Grape Leaves, which just came out on Telephone Explosion. The former Deadly Snake has now announced a record release show to celebrate the new set. It's slated for January 19 at the Baby G in Toronto.

Telephone Explosion also recently premiered a video for the song "Making a Living," directed by Eva Michon. You can check it out below.

Were you aware that Ottawa garage-punk band Average Times put out a new full length in September? I wasn't, and I'm regretful because they deserve some love. The band's self-titled debut from 2014 was a lot of fun, and I've had "Wasted on Wine" rattling around in the back of my head for years. This sophomore effort is titled Seconds and features 12 songs, including "Out of this World" (which the band previewed earlier this year) and "Dirty Laundry" (which premiered on the Ottawa Explosion Weekend's digital comp).

It's list season and I've been spending a lot of time trying to sort out my favourite records of 2017. One that rises a notch every time I listen to it is The Weather Station's powerful self-titled release on Paradise of Bachelors and Outside Music. CBC Music recently posted a live session that features Tamara Lindeman and her band performing nine songs from the record, accompanied at times by a full string section.

Sam Coffey & the Iron Lungs put out one of the year's best rock'n'roll records with July's self-titled effort on Dine Alone. The group's been supporting the album with a string of playful videos, and the latest for the song "Tough" is no exception. This one features the denim-vested band mugging around the CNE. Once again they hooked up with Shawn Kosmerly (of Sudbury's Dirty Princes) to direct.

Halifax D-beat hardcore group Fragment have released their debut LP In The Dust. The pummelling nine-song set is a joint release between Rawmantic Disasters and Desolate Records, who are together pressing 500 copies. The band features members of a number of Halifax hardcore and crust punk groups, including Lifechain, Contagium, and Concrete Asylum. LOUD.

Listen: Fragment - In The Dust @ Bandcamp

Not to make this newsletter disproportionally about Paul Lawton week after week, but he's giving us a lot of material so I'm going to run with it. The former Ketamines member recently saw the demise of Century Palm and the launch of his new group Don't Bother. Given the transition, the Toronto musician's collected and published a wealth of demo recordings related to both projects.

First up is a set we're calling Century Paul, which is a collection of Paul's demo material from 2014 through 2017 for Century Palm. Along with the music, you really should dig into the notes on the Bandcamp pages. If you nerd-out about the connective tissue between bands it's just a wealth of information. Check this out:

Ketamines did a big, stupid tour in June 2013, the band was me, Andrew Payne, Alex "Sex Dwarf" Hamlyn, Jesse Locke and Sarah Ford (who smartly bailed on the band right before tour). That tour was a killer, and by September Andrew, Sarah and Alex were out of the band (replaced by Joel French from Sam Coffey and Carmen Leah). Truthfully, I was in a really bad place that year (that was peak "Slagging Off" / "Paul Lawton, most hated man in Canada" era), and was alienating to everyone around me. That tour was fateful, because Andrew, Alex and Jesse and I also did a few sets as Zebrassieres, Andrew's band from Ottawa that I truly admired.

I got wind Andrew was starting a new band and decided to bail on Ketamines and start focusing on a band where I was in way less control. Century Palm started out as the new Andrew band, and I kinda talked my way into it...

Paul also posted a set titled Bother, featuring garage rock demoed in the period between the end of Century Palm and the eventual launch of Don't Bother. Lawton comments:

This music was all recorded within about 10 days, and serves as the interstitial period between the stuff that I'm doing with Don't Bother and the end of Century Palm. This stuff doesn't fit anywhere, but I like a lot of these songs and may use them in other contexts down the line. Who knows.

That's it for this week, perhaps this calendar year. Unless something noteworthy goes down between now and the end of December, Some Party's taking the holidays off. Cheers.