After teasing out the new single "Doghead" back in November, grungy Toronto post-punk act FRIGS have formally unveiled the details for their first LP. Titled Basic Behaviour, the 10 song set will arrive on February 23 via Arts & Crafts. The track list features both "Chest" and "Trashyard," songs the band released way back in November of 2016, along with the new tune "Talking Pictures," which you can preview below. The effort's the result of over 16 months of writing and recording, split between the four-piece band's home studio and Toronto's Union Sound. If that sounds like a long time in the oven, it is, and the band acknowledges it in the press release:

"Recording at home allowed the band to take the time to explore their sound, experimenting with sonic textures and production, and meticulously re-working their material. These sessions proved to be invaluable in creating a sound unique to FRIGS. However, a degree of positive urgency was deemed necessary in order to finalize the process. Working with engineer Ian Gomes, FRIGS embraced the limitations of third-party studio time and completed the record with a sense of immediacy. The resulting contrast between these two approaches in recording creates an end product that is at once stark, chaotic, reflective, and manic, ultimately forming the core of Basic Behaviour’s identity."

Bria Salmena's vocals sound pretty spectacular on this record. Listen to the four songs FRIGS have up and focus on how Bria, from one minute to the next, swings from a haunting drone to shouts of defiance.

I'm not sure how much I can say about Welland, Ontario's three-piece Dboy. Hell, I'm not even sure if it's safe to pin them to the Rose City. Some evidence points that way, notably that the band's debut full length, a mock-live record titled Prove Your Love - Live in Belem, was recorded by Welland's Daniel Romano. Oh, that and the fact that a line in their manifesto claims "DBOY has seized the means of production in order to keep Welland the center of the universe." Did I mention they have a manifesto? This, good reader, is a band with a fucking manifesto.

Dboy's a punk outfit who's keeping their identities hidden behind rubber bondage masks, and they're leaping into the public eye with some aggressive worldbuilding. Their website features a 13 point "program to end sonic austerity" and details on how to join their fan club, the Official Dboy Scout Order. Every member of the ODSO's granted a neckerchief, patch, pin, and mask: items the band expects fans to wear and show their shared solidarity to the Dboy cause. The group's even elected (created?) a spokesman, one Kirill Kutchokokov, president of the Scout Order, to speak on their behalf.

Dboy's presenting a remix of Turbonegro's costuming (and liberal application of sleeze) with some of the Descendents' homespun philosophy. I hesitate to define Dboy further, as this is really something you need to see and hear for yourself. The second I see a neckerchief in the wild, though, I'll report back.

Celebrated Halifax indie-rock act Nap Eyes have announced the follow-up to their 2016 LP Through Rock Fish Scale. The band will return with I'm Bad Now on March 9, with You've Changed Records handling the Canadian release (Paradise of Bachelors is covering the States, with Jagjaguwar picking up the rest of the world). The new record features 10 songs, with an extra available digitally. The lead track "Every Time the Feeling" is streaming now. Frontman Nigel Chapman's crafted a high concept for the record, one that seems to holds its heady complexity up in contrast to the amiable, easy groove of Nap Eyes' music. The narrative's wrapped up in multiversal theory, as inspired by the writing of the British philosopher Olaf Stapledon. Grab a coffee and see what you can parse from the initial press release, which must have taken Paradise of Bachelors founder Brendan Greaves a minor eternity to craft.

Nap Eyes once again features the Chapman and his Montreal-based bandmates Brad Loughead (lead guitar), Josh Salter (bass), and Seamus Dalton (drums). The new album was recorded and mixed by Howard Bilerman with Mike Wright at Hotel2Tango in Montreal. Halifax artist Danika Vandersteen produced the cover art (and wrote lyrics for the song "Hearing the Bass" as well).

Early in January, a pair of low-fi punk songs from a Windsor-based band dubbed No Fix popped up online. No Fix is the solo project of Matthew Menard, who plays in the group Psychic Void (they released a searing, reverb-drenched, psych-rock/hardcore-hybrid last summer). The songs "Local Boys" and "Negative Reclusive" find Matty channelling the late 70s with an authenticity and earnestness not unlike to the recent debut from Vancouver's Corner Boys.

A couple of days ago the Guelph, Ontario duo known only as the Bullshit Hardcore Band released a three-song EP. False Flags, News Rags, and Body Bags features three aggressively political songs, the title track along with "Skin in the Game" and "Apathy Rules." The band wrote and recorded the material in the spring and summer of 2017. If you want a sense of where this is rooted, check this note on an excerpt the band includes in the first song:

Track (1) contains an excerpt from a press conference given by the Washington Institute for Near East Policy titled ‘How to Build US-Israeli Coordination on Preventing an Iranian Nuclear Breakout’ wherein WINEP's Patrick Clawson frankly discusses what he terms ‘crisis initiation’ methods for starting war with Iran. If you listen closely you can hear the shock and uncomfortable laughter coming from the press corps in attendance.

In my head, I'm back in my dorm room at U of G hanging up a G7 Welcoming Committee ad I tore out of an issue of Exclaim.

I'm quite taken by the low-fi indie-pop of "Tear Apart," by London, Ontario's Yess Woah. It's the first single from the upcoming album Believe, which arrives on January 26. Yess Woah's a duo, an evolution from the stage name songwriter Yessica Woahneil used on her 2016 debut Cheekbone. The band is now a duo, with Juliette Grasso joining on drums. A video for the song, created by Life After Dev, effectively pairs the tune with some vintage horror footage and accentuates the raw, timeless sound Yess Woah has on display here.

Toronto garage-punk trio Faiyaz And The Wasted Chances are gearing up to release a new EP this month, titled Quality Control. The hooky first single from that set is titled "Breakfast in Bed." The new material was recorded and mixed by Dylan Frankland at Candle Recording and mastered by Noah Mintz at Lacquer Channel. I get New Swears vibes from this one.

Listen: Faiyaz And The Wasted Chances - "Breakfast in Bed" @ Bandcamp

NPR's Tiny Desk series, which features bands performing live at the desk of All Songs Considered host Bob Boilen, recently featured The Weather Station. Tamara Lindeman's joined for the session by bassist Ben Whiteley, Ian Kehoe (Attack In Black, Marine Dreams) on drums, and Will Kidman (Constantines, Woolly Leaves) on guitar to perform songs from the group's 2017 self-titled record. These include "Thirty," "You and I (On the Other Side of the World)," and "Free."

Dundas, Ontario's The Dirty Nil is in the studio recording their sophomore full length. This will be the proper follow-up to 2016's Higher Power (a singles collection titled Minimum R'n'B was released last year). It'll also be the band's first record with Ross Miller on bass. I saw the Dirty Nil a few weeks ago at their holiday shows, and the new songs they played came off great in a live setting. It looks like the band's working at the aforementioned Union Sound Company in Toronto, or at least I'm inferring that from an Instagram photo.

The Dirty Nil toured extensively last year, including a long stint supporting Against Me! in North America. While they were on the road, frontman Luke Bentham recorded a few songs solo and acoustic for Atlanta's Public Radio Sessions. You can find the video of him performing "Wrestle Yü to Husker Dü," "Little Metal Baby Fist", and a cover of John Prine's "Please Don't Bury Me" at YouTube.

Toronto writer Alison Lang, a former Broken Pencil Magazine editor and the author of the recent Women With Guts, has issued a call for submissions for a new zine titled Bands Men Have Ruined For Me. Here's the concept:

This is a zine that will collect stories about bands/musicians/artists/genres men have explained and mansplained and subsequently ruined for female-identified people since the beginning of time itself – at parties, at band practice, on the bus, in bed, at recess, on the internet, etc etc etc

The deadline for submissions is February 14, and you can get further details on the process at Lang's website. 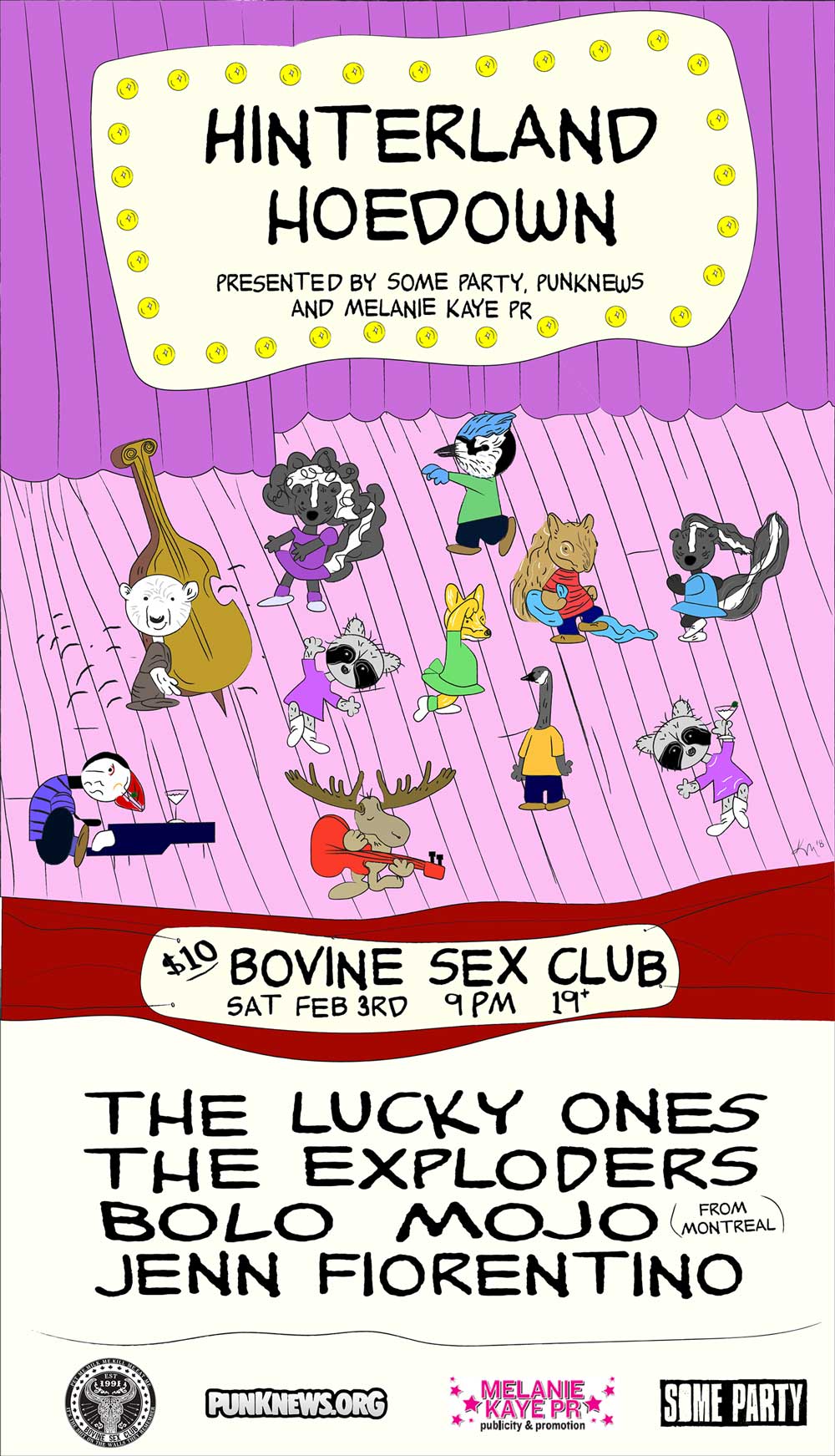 This year I'm pairing up with some of my longtime friends to throw a rock show or two.

On Saturday, February 3 Some Party, along with Punknews.org and Melanie Kaye PR, are presenting the Hinterland Hoedown at the Bovine Sex Club in Toronto. This'll be proper raucous punk rock show with a bit of a twist, as we're pulling together some young, upcoming talent to share the stage with a pair of veteran acts.

The event will feature St. Catharines drunk-punk vets The Lucky Ones, the reunited Toronto garage group The Exploders, Montreal's eclectic bilingual glam-rock influenced Bolo Mojo (making their first appearance in the city), and the Markham-based acoustic YouTube sensation Jenn Fiorentino. You can find all the details and RSVP on Facebook. It'll be $10 bucks at the door, and this is a 19+ show.

Toronto's Weaves have announced a March mini-tour in support of their acclaimed sophomore full-length Wide Open. As part of it, the Buzz Records act will be visiting the Niagara Region for a March 5 show at the Warehouse Concert Hall, a co-presentation of IndoorShoes and Some Party. The band will be supported by the spacey local psych-rock act Fourth Way at the event. You can grab tickets at TicketFly and follow for more details on Facebook.