André Ethier, former frontman of the beloved Toronto garage rock act The Deadly Snakes, returns this fall with a new solo album. The nine-track Croak in the Weeds is due on October 11 from Telephone Explosion, the second in a planned trilogy that started with 2017's Under Grape Leaves. Like that record, the new material presents a relaxed, minimalist counterpoint to the raucous noise of the Snakes' era. Ethier's sly sense of humour still seems to hover on the periphery, but it's a slight wink - never falling into the acerbic sass of his former band.

You can space out to the low-key single "Dream On Pigs" though the Eva Michon-directed, canine-starring video below. You'll note some birdsong in the mix, which suggests the new album will carry forward some of the soothing nature motifs established on Grape Leaves. In a press release, Ethier's comments on the record seem similarly rooted:

"I was imagining a pond at the swamp. A pond gets murkier the deeper you dive. Frogs are amphibians. They're in and out of the pond like it's no big deal, but we stay mostly on the shore and only peer in. Then, when the weather is right, the pond rises in a mist and we can breathe it too. We can be in the pond but also on the shore."

Ethier recorded the new album in his Toronto studio with producer Sandro Perri. Perri, a celebrated ambient and post-rock artist in his own right, previously worked with Ethier on Grape Leaves. Between that record and this, Ethier appeared as a guest vocalist on Perri's 2018 effort In Another Life.

Earlier in the summer, we learned that Montreal post-punk group Corridor would become the first francophone band signed to the Seattle's legendary Sub Pop. There was no new music to share at the time, but details have since come to light. We can now look forward to the 10-track full-length Junior, arriving this fall. The record's set to arrive on October 18, with Bonsound covering the release in Canada.

You can preview Corridor's new single "Topographe" in a wild new video directed by the band's Jonathan Robert. He had this to say about the clip, which should instantly call to mind Terry Gilliam's classic animated segments from Monty Python:

"While I've explored and mixed many different techniques in my past music videos, it's the first time that I took the process this far, blending all of them together in one place. It's a melting pot of stop motion, green screen, illustration, animation, collage, and live video. It's the visual equivalent of the progression of the song, a simple idea that takes amplitude through repetition."

London punks Red Arms are back with Critical State, a new 10-song full-length and their first new material since 2016's Let Every Nation Know. The four-piece recorded at 11th Hour Studios between the spring of 2017 and the summer of 2018, mixing at the Sugar Shack this past winter. You can preview the record with the muscular anthem "Ran Away." It's available now on Bandcamp and as a video by directed by SIDEMAN's Justis Krar.

Red Arms features guitars, vocals, and synth from Roberto LoRusso and Eric Longtin, backed by the rhythm section of bassist Curtis Hebert and drummer Jay Westman. "Ran Away," in particular, crests with such a massive sing-along that several guests from London's rock scene were brought in to back it up. The Red Arms Choir, as its named in the liner notes, features Jared Ellul (Heart Attack Kids), Robbie Brake (Isölation Party/Mononegatives), Steve Bennett (Nervousmen), and Mike Murphy (Sanseiru).

Critical State is due on September 13 from Yeah Right Records. A release show's slated for October 11 at the London Music Hall, with Stuck Out Here, Averages, and Thunder Queens supporting.

Speaking of London bands, the NYHC-styled hardcore group Jock has a new EP on the way this Friday, September 6, titled Messin' W// Damnation (or Messin' With Damnation, I've seen both kicking around). However it's spelt, you can check the killer title track below.

The new set should be available from Walk A Mile Records at the end of the week. It follows the group's 5-song debut EP Bust It, which surfaced in January.

Partner recently took part in the Polaris Music Prize Cover Sessions series, appearing on a three-song 12" available for free at select record stores this summer and fall. They appear alongside Afro-Canadian singer/songwriter Pierre Kwenders (who takes on on Jean-Pierre Ferland's "It Ain't Fair") with Edmonton indie-rock group Faith Healer (who tackle The Band's "When You Awake"). Partner's perhaps unenviable task was a cover of the Rush staple "Limelight," from 1981's Moving Pictures.

The Windsor-based slacker rock act recorded their take at Toronto's Union Sound Company. You can find it below along with live footage from the studio. The Cover Sessions series pairs contemporary Polaris nominees with material from classic Canadian as recognized by the Slaight Family Polaris Heritage Prize.

Partner last released the Saturday the 14th EP in April on You've Changed and Father/Daughter Records. It followed up the band's Polaris-shortlisted debut LP, In Search of Lost Time.

This week marks the live debut of Blue, the exceedingly posi hardcore solo project from Dirty Nil bassist Ross Miller. Kicking things off with a show at Hamilton's Doors Pub (which is happening as I write this), he'll take his newly formed live band on the road for a Thursday show at the Niagara Artists Centre in St. Catharines. An ask-a-punk house show will follow in London on September 14. Miller's band features members of Basement Revolver, Stay Down, and Captain Wildchild.

A pummelling new song titled "Change" was made available last week to commemorate the band's first shows. You so you can find it below (only on Spotify at the moment - sorry I try to avoid pointing you folks there if there's an alternative).

Blacktop Records is also issuing a limited cassette collecting Blue's Positive Attitude and Only Anger demos as a single set titled Only Attitude. You can snag one now at Bandcamp.

Hamilton's dialled-to-eleven space rock trio Blandlord make one hell of an impression with the explosive "Sun Explorers." Speaking to Pure Grain Audio the band commented on the apocalyptic track:

"The inspiration for 'Sun Explorers' is the stupidity and myopic nature of mankind. Mankind is racing towards extinction and ecological collapse because of our greed and pollution. These sun explorers represent how when men have the abilities to do great things they inherently fuck it up and in this case, fly directly into the sun. To sum it up people are fucking dummies and we are doomed."

Halifax post-hardcore group Missive has a new EP available titled The Tower. The five-piece recorded the three-song set over the summer of 2018 and winter of 2019 with engineer Adam Corkum. You can check it out now at Bandcamp. While I'm not the most well versed in the genre, these tracks seem to capture that Small Brown Bike-styled early-2000s emo sound to a T.

Last week at Punknews, I premiered a new song and accompanying video from the Toronto punk/alt-rock trio Excuses Excuses. You can find the Kevin Hmiel-directed clip for their anthemic new track "Empty" below. It's set to appear on the group's new EP Mind Over Matter, which arrives September 20. Fans of the last few Flatliners records should take note of this one, as there's a similar vibe here.

In a statement singer/guitarist Kyle Wilton commented on the new effort:

"The songs truly are singles; they are unique by nature. With these three tunes, the only thing we knew going into the studio was that we specifically wanted to bring something to our fans that was personal, raw, real, and altogether human. We wanted to give them a deeper look into who Excuses Excuses is, why we love what we do, and to show why we constantly fight to keep moving forward."

Excuses Excuses features guitarist/vocalist Kyle Wilton, bassist Trevor Bowman, and drummer Jason Nicoll. The new set follows the band's 2018 EP Catch Me If You Can. It was produced and mixed by Justin Meli at Chalet Studios in Uxbridge, Ontario.

Calgary's riffy stoner rock act Chron Goblin are set to release their new record Here Before on September 27 through Grand Hand Records. It'll be the prolific band's fifth LP. You can preview the single "Slipping Under" below.

"Slipping Under is one of the more complex arrangements on the album. It starts off with a dark n' dreamy clean intro, experimenting with some electronic drums, before it kicks into the heavy bridge and on to the tight n' groovy verses. The pre-solo section also includes more experimentation with the inclusion of some dirty 808 drops, something we haven't tried before! This song is a blast to play live with its multitude of changes and dynamics. Mike Fraser mixed this song, along with Ghost, and his take on both tracks added a nice depth and diversity to the album as a whole."

The band will hit the road this fall to support the new record alongside Edmonton's Black Mastiff. The tour kicks off in Lethbridge on October 10, heading east as far as Montreal, then turning back towards home to wrap with an October 25 show in Edmonton. You can find the full routing on the band's website.

Whitby's suburban grunge-punks Chastity has a third video available from their upcoming Home Made Satan LP. The clip, which features the new song "Flames," serves as a prequel of sorts to the narrative established in the "Sun Poisoning" and "The Girls I Know Don't Think So" videos over the summer. Frontman Brandon Williams spoke with Kerrang about the proliferation of visuals from the group, revealing that the videos are indeed portions of a wider work to come:

"All of these individual videos are part of a film I wrote, and it spans the record front to back. These videos are plucked from the film in order to drop singles. The premise of the film is, a young boy walks into a trailer park to trick-or-treat, and every door he knocks he enters into a new world..."

Williams comments that the film, in its completed form, should be available in the spring and could lend itself to some unique performance pieces down the road.

Toronto punk/hard rock act The Anti-Queens have a new video online featuring their single "Worse Than Death." The song's slated to appear on the band's 11-track, self-titled Stomp Records debut on September 13.

The Anti-Queens features Emily Bones on lead vocals and guitar, Valerie Knox (of Oshawa's Black Cat Attack) on guitar and vocals, Dallas Conte on drums, and Taylor Cos (of Newmarket's Rue Bella) on bass and vocals.

The Anti-Queens will play a handful of record-release shows in Montreal, Jonquière, Quebec City, and Toronto over the next month before heading to Europe for a tour with labelmates The Creepshow. You can find those details over at Punknews.

Want to win a pair of passes? Enter our draw and I'll pick a name from the proverbial hat before next week's edition.

Oktoberfest, now in its 11th year, takes places in the brewery's rural hometown of Vankleek Hill, Ontario, which sits about halfway between Ottawa and Montreal. Last year's event (despite a slight tornado-based setback on the opening night) attracted over 17,000 attendees and raised $94,323 for local community groups. Since 2009 the event's brought in $711,212 in charitable funding.

This year's event will showcase Bavarian-style food from local restaurants, 65 different beers (with 14 brewed by Beau's and the local Halcyon Barrel House), "School of Bock" classroom sessions led by experts from the brewing world, and an array of games, activities, and competitions for attendees. 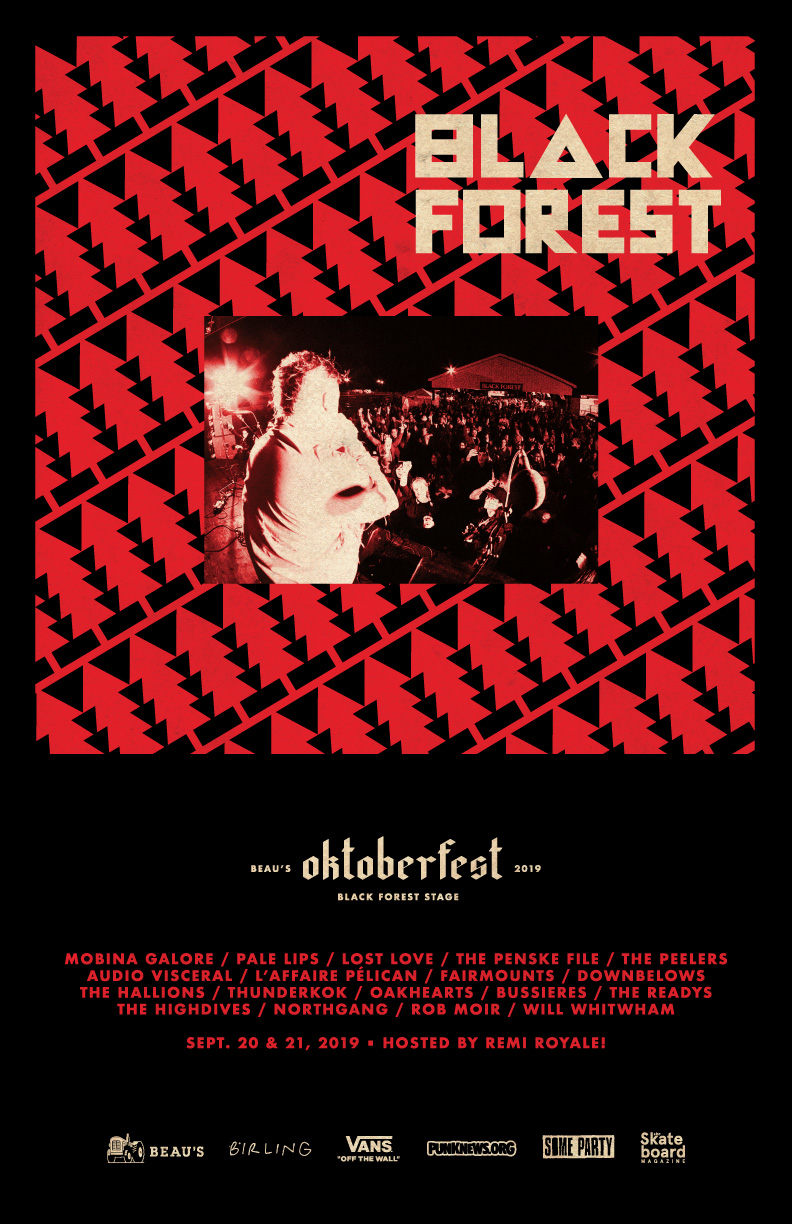 Subscribe today and find the Some Party newsletter waiting in your inbox once a week. React to it at your leisure.