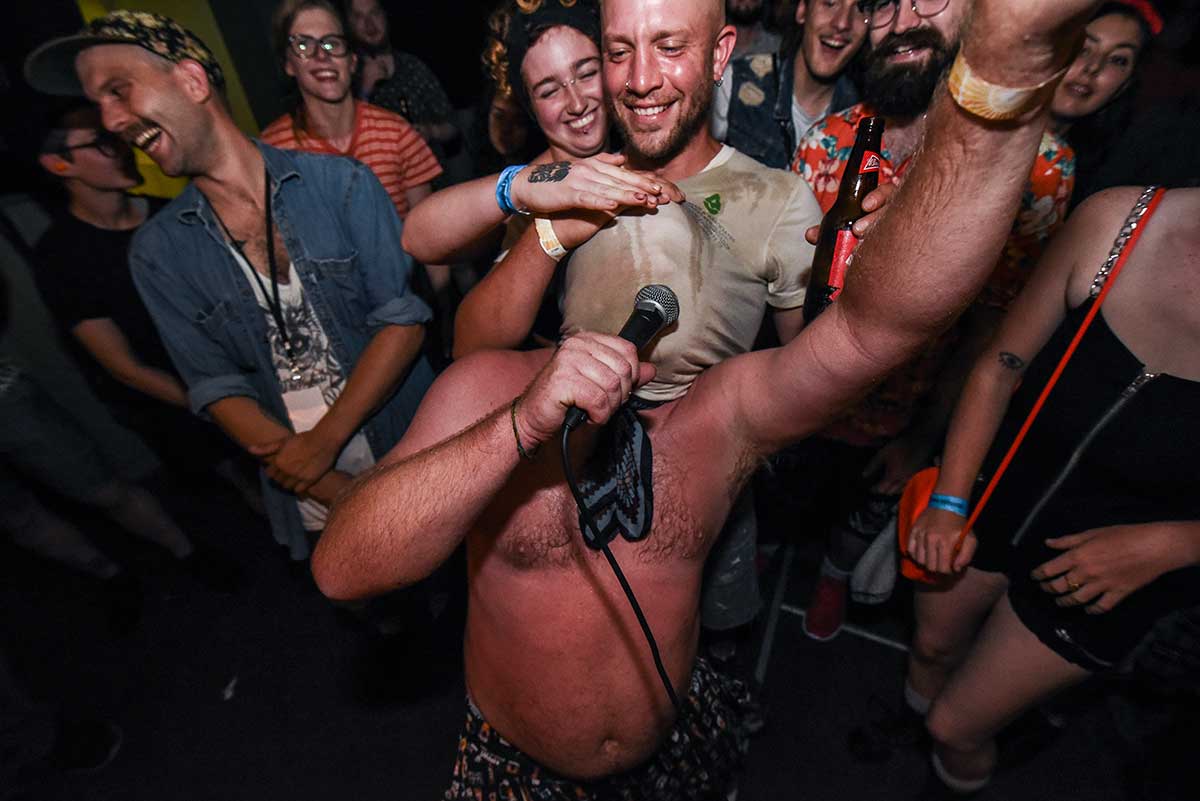 Photo by Stephen McGill at SappyFest 13

B.A. Johnston's the one artist I can think of who's mastered the most tedious aspect online music promotion: announcing the next show. The problem is that outside of the immediate local market, nobody cares. There's many a band I'm a fan of who I dare not follow online to avoid the tedious, plodding social media posts promoting their next club show, and the next, and the next, and the next. Stoked to play Albany tonight, you can buy tickets online here. Early show in Boise today, tickets available at the door.

B.A., as with all things, treats his relentless touring as just another beat in a long-running joke. The self-described "failed showman" heralds his arrival in the next bar with tongue-in-cheek disdain for either himself or the destination, often both. I never tire of reading these, regardless of their proximity to me personally.

"You know how you tell yourself I'll never play this town again, and then somehow in like two years you find yourself back there again? Barrie I'm back. Foxx lounge tonight. Doors at 9."

"It's a blur of Schooner and blood. Questioning your life's choices and then realizing free will doesn't exist. Spending your nominal cover charge on more Schooner tonight. Halifax. Gus Pub."

"Dodge Caravan loaded and headed towards Bracebridge for some reason. Kelly's Pub. Show around 10"

Johnston's Caravan figures regularly into his travelogue, and increasingly his music. Take "Jesus Take The Wheel" from his upcoming full-length The Skid Is Hot Tonight. In this track, the homely minivan nearly meets disaster, spinning out on black ice somewhere on the cruelly endless highways that connect this country. Johnston's life flashes before his eyes, his many regrets coming to the fore. In this, perhaps his final moment, he calls to a higher power for an assist.

"Jesus Take The Wheel" is one of 21 songs packed onto The Skid Is Hot Tonight, which arrives on February 22 from Winnipeg's Transistor 66. It's Johnston's 12th album. This new record, like its 2017 predecessor Gremlins 3, was produced by Mathias Kom of The Burning Hell and recorded at The Quarantine in Port Greville, Nova Scotia with Colleen Collins and Dave Trenaman of Construction & Destruction. In the studio (and on this tune), B.A.'s band band featured Joel Tong on guitar and Jon Mckiel on drums.

Johnston will support the new record with an extensive tour, taking the Dodge back out on Canadians roads from February through April, followed by a set of UK dates in May. Details are forthcoming on a late-May visit to Germany and a run through the Maritimes this June. The forthcoming Canuck dates will feature appearances from bands like Beef Boys, Flesh Rag, J Blissette, and Deathsticks on various dates.

Of course, the only thing better than seeing B.A. live is to watch some other band seated next to B.A. as you drink 20 dollar beers in the ACC. KISS is bringing their End of the Road world tour to the Big Smoke on March 20, and you can win a trip to see the show with Johnston. If you want in on this, you need to use the #KissBA hashtag on Instagram or Twitter to convince B.A. you wouldn't be a total drag to hang out with. Entries are also valid through the CHUD Club group on Facebook.

The contest announcement came alongside another thematically-fitting album track, "We're All Going To Jail (Except Pete, He's Gonna Die)." It's a song about seeing Van Halen on mushrooms. Be warned, eventual KISS winners.