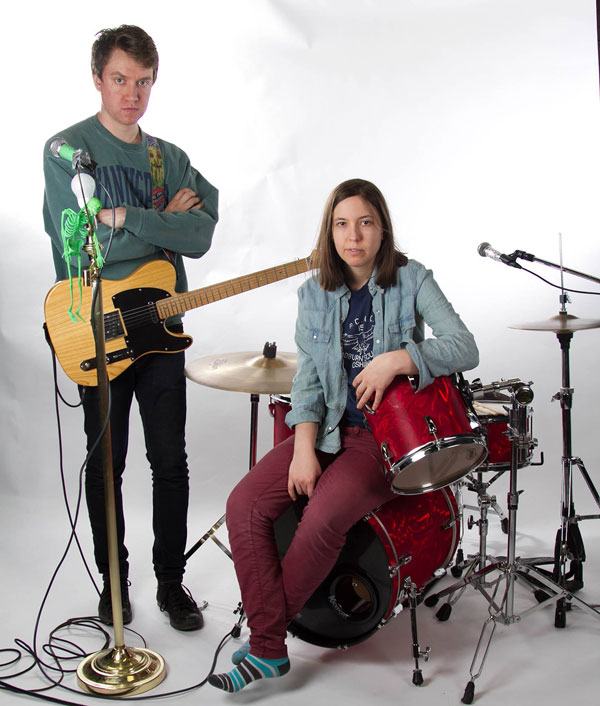 That's the refrain guitarist Matt Post and drummer Laura Klinduch of Deathsticks shout in their new single "Finger Food." It's undoubtedly a reference to the lightbulb-screaming noise-punk duo's recent move from Peterborough, Ontario up to Ottawa. While the nation's capital may boast an active music scene, particularly in the gritty garage vein that Deathsticks revel in, it's certainly a bigger pond, for better and worse.

The band's gearing up for the release of their new EP Deathsnacks, a four-song 7" set they'll unleash in the spring. I'm happy to premiere the first song from the record, a rager titled "Finger Food." I asked Klinduch about the track, which has a sentiment that ties in with the very mission statement of this newsletter. "The song is about feeling insecure or inadequate about your place as an artist in the larger Canadian music community," she tells me. As feeling insecure and inadequate about one's place in the Canadian music community is my stock-in-trade, this resonates.

Deathsticks isn't without allies though. The past few years have seen a string of split EPs with some of the coolest bands kicking in the noisy Canadian underground. Most recently they took part in a four-way split with Toronto's sardonic WLMRT, Montreal garage-punk act Nüshu, and the gothy Halifax-based Nightbummerz. Before that, the duo shared record sleeves with the muscular Saint John punk four-piece Right Shitty and the politically charged Guelph two-piece Bullshit Hardcore Band. Deathsticks were even part of The Famines' convention-daring Pentagon Black paper compilation series.

While Deathsticks have been gigging and releasing material regularly, video marks a new frontier for the band. "This is the first music video we’ve done, it was filmed around our house in Ottawa" Klinduch comments on their clip for Finger Food, which is as aggressively playful and DIY as the band's ramshackle songwriting. "No vinyl records were harmed in the making of this video," she lies. The footage says otherwise.

Deathsnacks releases digitally on April 27. You can pre-order it over at Bandcamp. a 7" release is expected soon.